In the train, during a part of the return journey from Baroda, we had the company of a gentleman who had with him a remarkable looking dog. I had not seen one of its kind before, as far as I could remember; though of course I might have seen one and not noticed it, for I am not acquainted with dogs, but only with cats. This dog's coat was smooth and shiny and black, and I think it had tan trimmings around the edges of the dog, and perhaps underneath. It was a long, low dog, with very short, strange legs—legs that curved inboard, something like parentheses wrong way (. Indeed, it was made on the plan of a bench for length and lowness. It seemed to be satisfied, but I thought the plan poor, and structurally weak, on account of the distance between the forward supports and those abaft. With age the dog's back was likely to sag; and it seemed to me that it would have been a stronger and more practicable dog if it had had some more legs. It had not begun to sag yet, but the shape of the legs showed that the undue weight imposed upon them was beginning to tell. It had a long nose, and floppy ears that hung down, and a resigned expression of countenance. I did not like to ask what kind of a dog it was, or how it came to be deformed, for it was plain that the gentleman was very fond of it, and naturally he could be sensitive about it. From delicacy I thought it best not to seem to notice it too much. No doubt a man with a dog like that feels just as a person does who has a child that is out of true. The gentleman was not merely fond of the dog, he was also proud of it—just the same again, as a mother feels about her child when it is an idiot. I could see that he was proud of it, not-withstanding it was such a long dog and looked so resigned and pious. It had been all over the world with him, and had been pilgriming like that for years and years. It had traveled 50,000 miles by sea and rail, and had ridden in front of him on his horse 8,000. It had a silver medal from the Geographical Society of Great Britain for its travels, and I saw it. It had won prizes in dog shows, both in India and in England—I saw them. He said its pedigree was on record in the Kennel Club, and that it was a well-known dog. He said a great many people in London could recognize it the moment they saw it. I did not say anything, but I did not think it anything strange; I should know that dog again, myself, yet I am not careful about noticing dogs. He said that when he walked along in London, people often stopped and looked at the dog. Of course I did not say anything, for I did not want to hurt his feelings, but I could have explained to him that if you take a great long low dog like that and waddle it along the street anywhere in the world and not charge anything, people will stop and look. He was gratified because the dog took prizes. But that was nothing; if I were built like that I could take prizes myself. I wished I knew what kind of a dog it was, and what it was for, but I could not very well ask, for that would show that I did not know. Not that I want a dog like that, but only to know the secret of its birth.

I do not believe that it is suited for elephants. It lacks energy, it lacks force of character, it lacks bitterness. These things all show in the meekness and resignation of its expression. It would not attack an elephant, I am sure of it. It might not run if it saw one coming, but it looked to me like a dog that would sit down and pray. 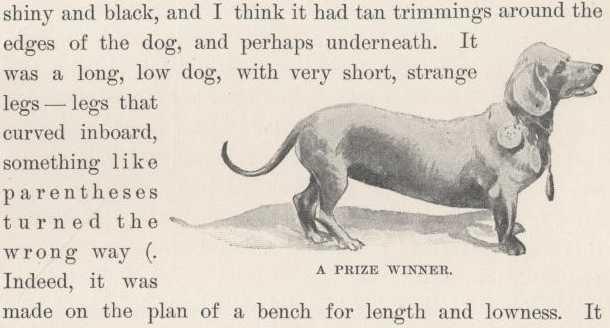